While most people have never heard of it (existing as it does away from the main settlements of the Andaman Islands), North Sentinel has been known of for centuries.

Marco Polo had passed through the area in the late 13th century, describing the Andamanese as “a most brutish and savage race, having heads, eyes and teeth like those of dogs.

They are very cruel, and kill and eat every foreigner whom they can lay their hands upon”.

But it was not until 1771 that it was first specifically mentioned by an East India Company survey vessel, which observed the lights from fires on the shore. 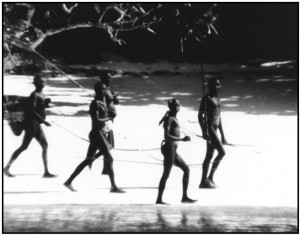 The island seemed to be forgotten until 1867, when an Indian ship called the Ninevah was wrecked on its beach. The 106 survivors set up a temporary camp and were attacked a few days later.

They managed to fend off the worst of the onslaught but, if it hadn’t been for a Royal Navy steamer which arrived shortly after to rescue them, it is unlikely the terrified group would have survived.

For the next hundred years the island and its people were left alone but rumours persisted about North Sentinel and its warlike inhabitants.

By the Seventies, most of the native peoples of the Andaman Islands had either been contacted by outsiders or partially integrated into modernity by the Indian government, which felt it was integral to the area’s progress.

With this in mind, a group of anthropologists, a film crew, a National Geographic photographer and a group of armed policemen made their way to the island in 1974, hoping to win the friendship of the Sentinelese using the tried and true methods of colonialists throughout the ages: friendly gestures and plenty of gifts.

Unfortunately for this group of idealists, they failed. On landing and placing items such as a doll, pots and pans, coconuts and a live pig on the beach, a group of natives approached brandishing bows and arrows which they proceeded to fire at the intruders. The film director was hit in the left thigh and the group made a hasty exit in their dinghy. From the safety of the water, they saw the Sentinelese spearing both the doll and the pig, and burying the gifts in the sand.

This was not the only hair-raising encounter outsiders would have with the Sentinelese. In 1981 a Panamanian freighter, the Primrose, ran aground in heavy seas just off the island.Relieved to see land in the morning, the crew’s relief turned to apprehension when they saw a group of natives waving weapons at the boat. An urgent distress signal was sent out.

“Worrying they will board us at sunset. All crew members’ lives not guaranteed.” For nearly a week the crew of the Primrose, armed only with flare guns and a few axes, fended off an attack before they were rescued by an Indian Navy tugboat and helicopters. Once again it seemed as if any hope of peaceful contact with the Sentinelese had been dashed.

However, one anthropologist did manage to make peaceful contact with the Sentinelese in 1991 when he was stationed in the Andaman Islands.

TN Pandit made a number of trips to the island over a period of 20 years, observing men, women and children from a distance before finally interacting with the inhabitants in 1991. In this encounter, a group of Sentinelese men peacefully approached Pandit and his companions and even climbed into the dinghy to curiously touch everything.

Pandit distributed coconuts, which the tribesmen eagerly took. Their language, however, was impenetrable and it remains unknown to this day.