More than 1,200 km from mainland India and just 140 km from Sumatra at the nearest, the North Sentinel Island found at the west of the Andaman Islands is a mere 72 square kilometres, roughly twenty percent bigger than the area of Manhattan.

The square-form island is mostly covered in forests which makes the task of counting its population even more difficult.

The 2004 tsunami changed the island’s geography.

The island’s lagoon has been eroded, making it more difficult for the Sentinelese people to fish. However, after some recognizing missions, it seems that they have adapted to the new conditions. 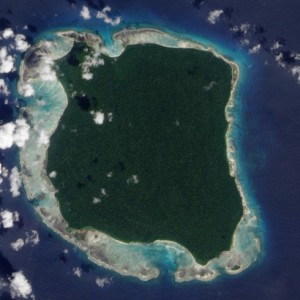 There is not much information available about the island outside of aerial photographs and the accounts of anthropologist TN Pandit. It is known that in 1880, government worker, Maurice Vidal Portman arrived on the island. Based on his account, there were a number of pathways as well as some deserted villages there.

He took 6 locals to Port Blair, the capital of the Andaman Islands, but after two of them died, the others were returned soon after.

The island is one of the last inhabited ones that are not explored. Politically the North Sentinel island belongs to India since 1947.

However the status of the island is technically in a state of oblivion as there was no treaty with the Sentinelese in which they would give up their sovereignty, thus practically it is an autonomous region of India.

As currently there are no planned expeditions to the island, the status of the island will remain unchanged and hopefully the Sentinelese people will survive just how they did for centuries.