Up until the mid-1990s, the Indian government conducted a series of tentative “contact expeditions”. Boats travelled to North Sentinel Island and tried gradually to win the tribe’s trust by leaving coconuts and other gifts.

For some time these visits met with hostility, but in 1991 the first recorded friendly contact between Sentinelese tribes people and outsiders took place. Islanders waded out to a dinghy to take coconuts directly from their visitors.(Bellow you can see the video)

A scholar of the Andaman Islands and of the Sentinelese tribe would have been on that dinghy but for a family emergency that caused him to send two assistants in his place. 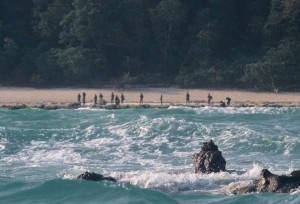 A few weeks later, though, Pandit too had his long-awaited encounter with the Sentinelese.

Recounting the events to The American Scholar some years later, Pandit’s words revealed his personal joy at the occasion, but more so than that a strange complacency about the fate of a culture he had devoted so much energy to studying.

“That they voluntarily came forward to meet us – it was unbelievable,” he said.

“But there was this feeling of sadness also – I did feel it.

“And there was the feeling that at a larger scale of human history, these people who were holding back, holding on, ultimately had to yield. It’s like an era in history gone. The islands have gone. Until the other day, the Sentinelese were holding the flag, unknown to themselves. They were being heroes. But they have also given up.

“They would not have survived forever – that, I can reason out. Even destruction takes place in the natural course of things; no one can help it, it happens. But here we have been doing it in a very conscious way, knowing full well what the consequences could be.”

Towards the end of the visit, Pandit was in the water with a group of Sentinelese when the dinghy drifted slightly away from him. One of the tribesman pulled out a knife and pointed it threateningly at Pandit, obviously thinking that Pandit intended to stay on the island while his companions sailed off. The boat quickly returned, however, and Pandit left.

Not long after this encounter it was decided that further attempts to make contact with the Sentinelese should be abandoned and these intriguing people should be left to their own devices. Whether their isolation will be maintained, however, remains to be seen.